Tips and tricks by moving pigs

Why do pigs stagnate when trying to move from one place to another? How can we help the animal and make our work easier?

The procedure of animal moving, in our case pigs, sows is a daily issue. In some cases, can be very difficult to move specially grown up animals from one place to the other, but we have to notice that in each case we have to be very patient. We could also say work smart instead of work hard. By using tricks in 99% of the cases we can succeed with our goal without forcing the already bad situation.

When we are doing the moving procedure and the sows, pigs stop in the middle of the corridor, we often ask: Why did they stop?  Is there something to be afraid of? We have to know that everything what is unusual for the animal, like wind, lightness, different type of floor, smell, noise, they haven’t met before will always give a negative impression and behavior.

Did you ever ask yourself why the animal is getting stubborn in these cases? The explanation is very simple. We are doing something unusual. Let’s pretend that, we would like to move sows from the farrowing department to the insemination unit. First of all, the sow has to leave the piglets, the other thing is that we would like to move our sow from a known safe (28 days lactation) place to an unknown place. Just think about as human we are as well afraid of unusual, or unknown things. In such cases violence does not help. It is more successful if we give space and time, to calm down the animal.  Of course, it will always be challenges by moving animals from one place to the other but as I have mentioned previously, with a good routine 99% of the cases can be solved. Tricks like switching off the light in the room from where we would like the animal to move out and let the light on in the rest of the way ( corridor… ), or switch of the ventilation, so we avoid airflow while we are moving animals, perhaps letting an older animal in the same time together with the problematic animal. If these tricks don’t help, we still have a possibility to pull the sow in reward with a moving plate, to make narrow the horizon of the sow.

Moving animals in group is more simple, because in this case we have a flock leader (usually the dominating animals), and the rest of the flock is following the leader. It’s very important when we are moving animals in group to give bigger space after the last animal, which help us to have better reaction time if something goes unusual or some animals turn back. The other reason why is a need for space, that guiding person who is moving a flock, has to fall out from the animal’s deadlock (dead angle). If the animal can’t see you, will definitely would like to return back on her safe, known place.

If we have mentioned the “DEADLOCK”, yes, every animal has an angel where it is not possible to see the approaching enemy, in our case the guiding person. By moving pigs, the returning animals in 95% of the cases are the animals who were moved by force from the safe place to the unknown (unsafe in pigs mind) place. 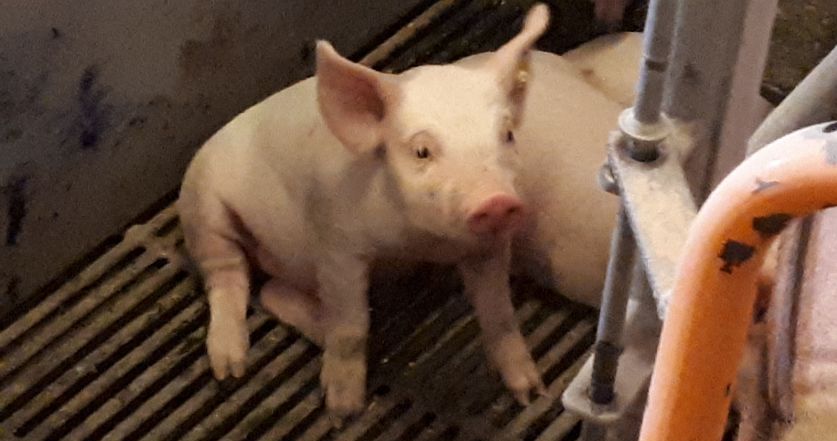